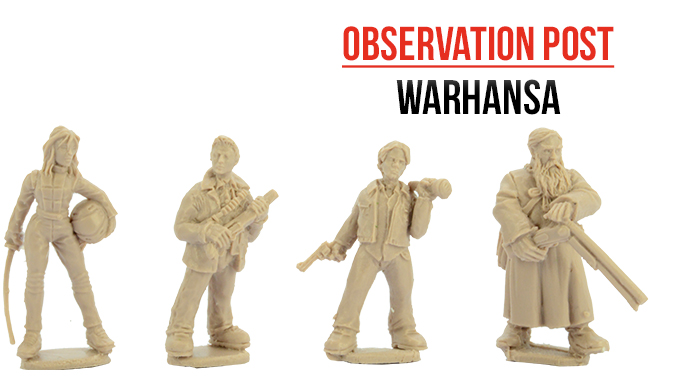 The Witch Hunters pack consists of four well-sculpted miniatures cast in a salmon pink coloured resin. Three of this miniatures could be said to bear a passing resemblance to characters from TV and movies. Two of them wield weaponry that could perhaps be useful for vanquishing demonic excursions, whilst the female miniature is clad in what appears to be biker leathers, with a crash helmet in one hand and the other has a katana. The fourth figure looks like he could be a Russian or Greek Orthodox Church priest, but one armed in the process of loading an over and under shotgun.

The Illuminati pack also consists of four miniatures, this time with three female miniatures and one male. One of the female figures is clad in a uniform of some sort, right arm out-stretched whilst the left cradles a book with an occult symbol on the cover. The second wields a large sword, in the process of preparing for a strike. The third female figure appears to be using a mobile phone whilst casually holding a suppressed machine pistol in here other hand. The male figure is a large ‘gentlemen’ in a suit, a touch of the gangster about him with his coat arrayed over his shoulders and clutching a kukri in his hands. His disdainful sneer conveys how he feels about the world.