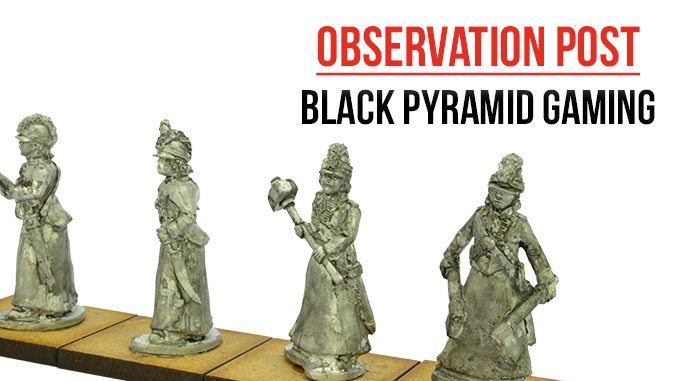 Black Pyramid Gaming continues to add more miniatures to their 19th Century militia range, with a couple of twists with regard to choice of subject.

First of all, all the Fencibles are women, dressed in long skirts and military style jackets. Many of these wear traditional bonnets or are bareheaded with suitable hairstyles of the time. They are armed with a variety of weapons, some with muskets and, as shown below, a series of items for use in close combat, with each ‘lady’ wearing a Tarleton helmet.

Secondly, these militia are not designed to stop the French invasion, but instead to take on ‘rotters’, the unquiet dead who have returned to take over the green fields of England. The range also now includes a command pack, an artillery crew and the occasional character figure, such as a sergeant-at-arms with a heavy cavalry sword.

Sculpted by Mark Sims, these are four or five figure packs with some excellent sculpting and characterization. They’d make a suitably ‘quirky’ unit for a host of games from skirmish to battlefield level. There’s enough variety of miniatures in the range to create some interesting companies or battalions. For further information, take a look at the Black Pyramid website.