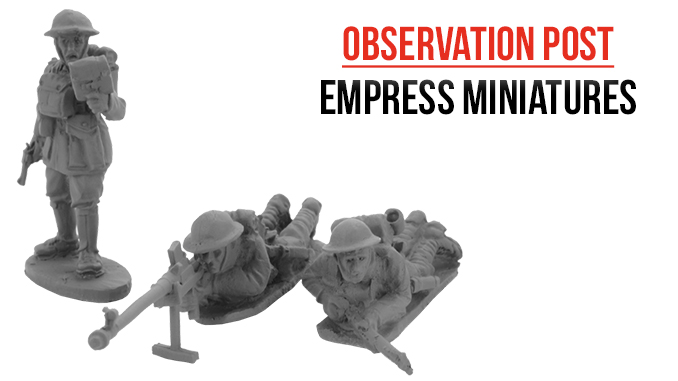 Empress Miniatures continue to add to add to their impressive World War Two range with these Mid 1930’s to 1940 British infantry. The latest pack is a Platoon or Company command pack, complete with an attached support weapon.

When some of the BEF units were deployed to France in 1940, they were still wearing the old service uniform which had been adapted over time from the WW1 version. Not every unit had received the new battledress tunic and trousers, although they did have the ’37 pattern webbing and equipment. Empress Miniatures employed ace sculptor Paul Hicks to produce some figures that would be equally at home in the Very British Civil War alternate history or defending the UK during the reality of an Operation Seelowe-type invasion.

This particular pack of 4 figures consists of two officers with pistols in full kit, complete with gas masks. One appears to be consulting a map held in his map case, whilst the other advances cautiously with his service revolver held ready for action.

The other two figures comprise of a support element, perhaps attached to the command HQ. This is a two-man Boy’s anti-tank rifle team, lying prone and ready to fire. Both gunner and loader are here, ready to engage enemy armour or vehicles as it pushes forwards.

All of these figures are full of character and demonstrate a high level of research into uniforms, equipment and weaponry. This is an excellent range from Empress and is pleasingly different to all the others on the market. I do hope that more are on the way.