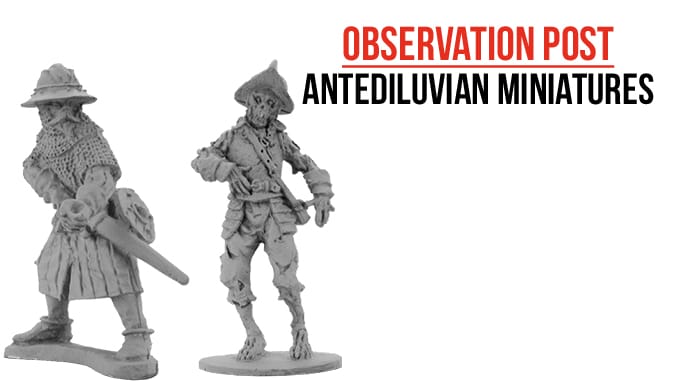 Antediluvian Miniatures continue to release some excellent miniatures for their small but ever-increasing ranges of miniatures. This time around we have Medieval era spearmen from the Wars of the Bruce’s period, plus the more unusual, a packet of Conquistador zombies.

The Wars of the Bruce’s were battles between King Robert I and his brother against the encroaching Edward I, a series of battles designed to keep Scotland independent and add parts of Ireland to the Scottish realm.

The latest pack for this period is Spearmen 3. These are very well sculpted figures with plenty of detail and character for each one. There are four figures in the pack, although we’ve focused upon two, an advancing figure with his hands ready for a spear (not supplied), plus a helmeted spearman who needs his hand drilled out to hold a spear whilst he draws his sword.

The next pack is from the Conquerors of Mictlan range, which consists of various historically based Conquistador figures, but versus the Undead rather than ‘normal’ Aztecs. We’ve picked out two figures from the packs of Conquistador Zombies we were provided with. Each pack consists of three figures that are probably the first such figures on the market! If that’s the case, if anyone else intends to follow a similar theme, these will be a hard act to follow. The figures are excellent, evoking the concept very well and have a great, shambling aspect in the poses.

Sometimes, ‘shopping small’ is the best approach. The smaller the company, the more experimental and niche creating / filling they can be. Antediluvian is one such ‘one-man band’ who deserves to be commending by daring to be different in a sea of sameness.