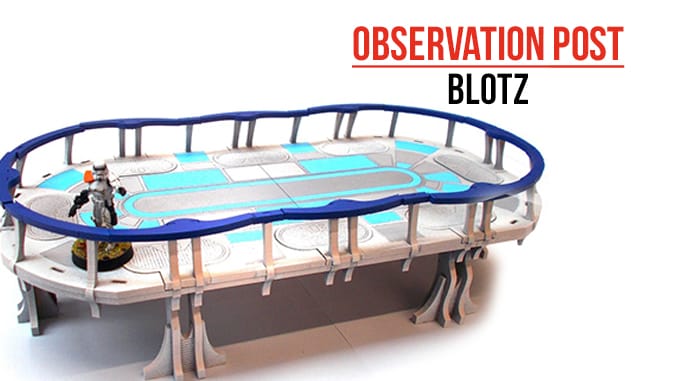 Blotz are a company which offers MDF buildings and terrain that covers both the more obvious and the slightly esoteric in equal measure.

Sets B28-SFC-002, 018, and 019 are Stairs and Walkway sets which offer some grilled steps, curved handrails and a suitably sci-fi look. These consist of some one sided, well-etched parts with some indented details and look like they would  fit together simply and quickly.

B28-SFC-001 is a Small Round Platform, which comes with the option of using short or long support ‘legs’. Again, the details are on one side of the MDF, but is well etched. The use of curves and other shapes make this a usefully sci-fi piece.

B28-SFC-005 is a much larger, Oval Platform, again with the option of short of long legs. Consisting of two frames of MDF, the platform itself is in two parts, again with some nice touches in terms of curves and detail.

Finally, B28-SFC-006 is a Lookout Cupola, obviously designed to be attached to another, more stable piece. It has a touch of the Star Wars universe about it, whilst being an original design.

These are well-cut and designed MDF pieces, which evoke the sense of being part of a sci-fi universe rather than simply sticking with the standard ‘real world’ shapes. Blotz have a whole variety of similar buildings, plus more historical fare and extras which other companies don’t produce, such as a crashed spaceship and a series of nicely done naval vessels. Attention to detail, quality laser cutting and intricate design are obviously all important to this competitively priced range from an expanding company.