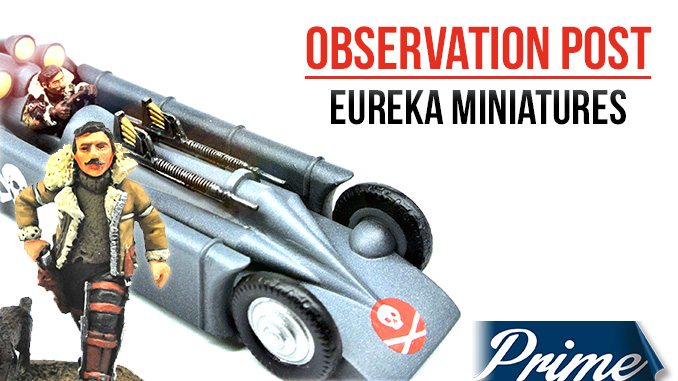 Eureka Miniatures of Australia produce a whole variety of figures from many periods. Some of their latest offerings are these resin and metal cars designed for use during an alternate 1930’s where the world has been changed beyond recognition.

There are four different vehicles available, including one and two seater Roadsters and a three-wheeler. There’s also a car that bears some resemblance to the type of sleek vehicle usually used to attempt land speed records.

Each vehicle consists of a resin body and comes with a number of metal accessories including wheels, heavy and light machine guns and pintle mounts. There are also a number of well-sculpted pewter drivers that can be placed in the driver’s seat and gunner figures for those that need the same. The idea is that you pick your weapons and fix them to the vehicles. Some of the kits come with additional resin and metal parts to allow for customization.

The vehicles are designed to be used with a forthcoming ruleset from the team behind Mana Press and feature the title character, ‘Mad’ Maximillian, and the other denizens of the Wasteland of the 1930’s. Probably the most unique vehicle is that driven by Max himself, complete with twin autocannons that can be fixed to the resin body. In addition to the driver figure, the set also comes with a standing 28mm miniature of Max himself, complete with his canine sidekick.

These are excellently sculpted and cast miniatures, and are more than a little quirky. They are very much 1930’s vehicles, and could happily feature in other alternate settings across the globe. The fact that there is an upcoming rules system and background to support these releases means that the simulated roar of classic car engines may soon be heard on many a tabletop very soon!