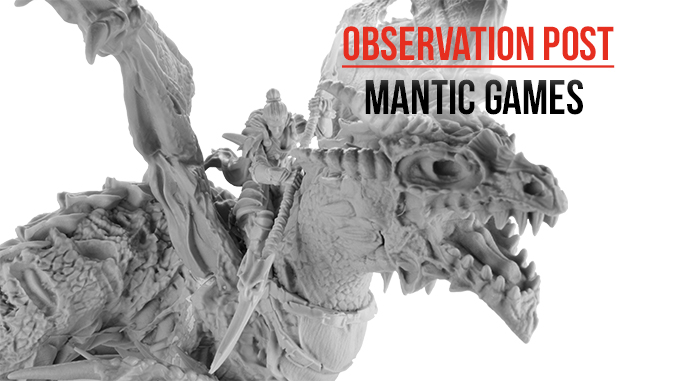 Mantic Games continue to expand their Kings of War game universe. Some of their latest offerings add yet more monstrous creatures, cast in high quality resin to bring out every dangerous detail.

Starting with the Fire Elemental Regiment, we have three figures with separate arms. Designed to represent the types of creature that could be conjured by a wizard or living beings in their own right, the level of detail on these resin figures is of a high quality. They are not only evocative of the living flames they represent but are also crying out for a paintjob that may appear simple but deserves to be done after research and thought. Taller than the average 28mm figure, these would be menacing opponents on the tabletop battlefield.

Of course, once you have the basic Elementals, you need the next level, as portrayed by this figure of a Greater Fire Elemental. This figure is three times or more taller than the average 28mm miniature and appears to be comprised from flames, scorched wood or partially melted rock. Rising from a column of smoke, composed of roaring flames, this is the big boss, the creature that can tackle a unit alone or add support at just the right moment.

However, the creature that could probably tackle a whole army is this Undead Vampire Lord and his Undead Dragon. A fleshy creature, this is a tattered, decomposing but still imposing figure, fantastically reproduced in resin which has captured every aspect of a nightmare of a zombie. Larger even than the Greater Fire Elemental, with rotted wings and exposed bones, this beast would grace any army of the undead and acts as a suitable mount for the vampire Lord which wears vicious looking armour and wields the type of double-ended halberd that could deal out a fair amount of damage.

The quality of design and casting of these miniatures is exceptional, begging to be painted with care. Although they are figures firmly placed within established fantasy tropes, they have a level of variety that makes them different to the majority of similar offerings out. Whether they grace your Kings of War games or end up being used with other rules, these are the type of creatures you can rely upon to strike fear into your opponent and make them think twice about attacking or defending that objective.