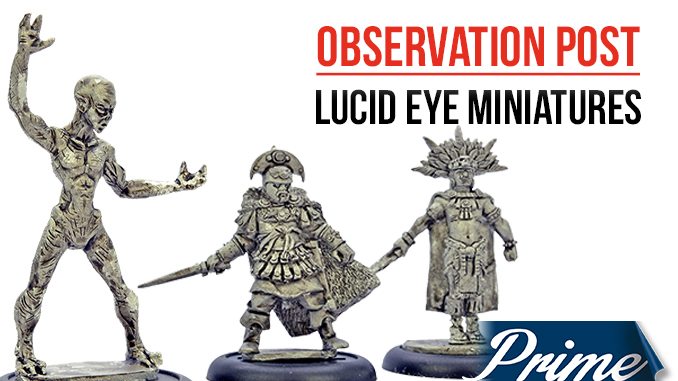 Lucid Eye continues to forge ahead, creating more miniatures from the talented hands of sculptor Steve Saleh and striving ever onwards with settings and rules.

This time around, we have items from three of the current concepts. Firstly, for the main Savage Core range, we have The Id, the alien masters behind the creation of the Lost World. There are three packs in the range so far, conforming to the standard set up of a Faction in the Savage Core rules. We have a Boss in a single figure pack and two packs of three Bods and a piece of scenery. The Id are this game’s version of the classic Greys of UFO myth, although these seem less benign looking and have a touch of evil about them. The Boss is a large, imposing figure, whereas the Bods come in two styles, one set pointing with some sort of weapon and the other wielding small orbs. Both Bods sets come with a large spherical object on a plinth.

The next set of miniatures are all single figure packs for use with Age of Ice, apparently a new era partially set within the Savage Core universe. All of these figures are bundled up in furs and warm clothes against the cold, except for the Jaguar Tribe High Priest, who is dressed in Aztec fashion. All of these figures represent the leaders of the relevant Factions, the Bosses, so we have a Cro Magnon, Atlantean, Neanderthal, Amazon and Simian. Each of them is extremely characterful, with each figure packed with details that cry out for some careful painting. As most are clad in furs (or have fur!), the use of washes may aid this process.

Finally, for now, we have a new character for the latest setting, The Plot Device. This is the universe created by the company and subtitled ‘Citizens of a Far Out Dimension’, a psychedelic realm within a multiverse of adventure. The new figure is named Zal, an Utltrateen, a dapper fellow clad in a flowing coat with an artfully tilted bowler and resting upon a cane. This is actually a partial re-working of a previous character but counts as a new figure. In fact, in comparison, this shows how far Steve’s sculpting style has come, and makes one excited to see what he may come up with next.

These figures would be suitable not only within the settings for which they are intended but also for a host of others. Every single figure conveys a sense of character, with every aspect of the sculpting process being geared towards this.