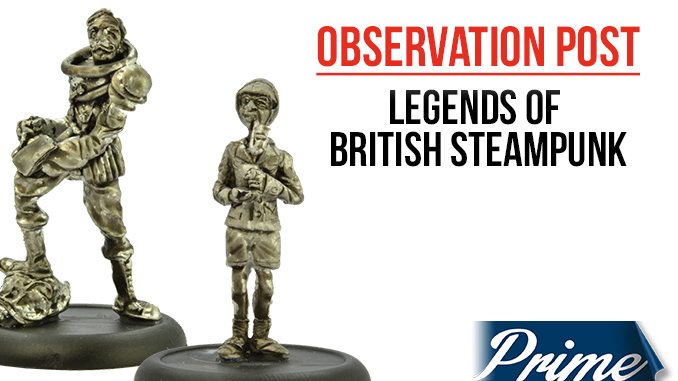 The world of Steampunk is a global phenomenon but it is also uniquely British. Oakbound Studios have chosen to capture the very best of those who adhere to the Steampunk lifestyle with these miniatures that showcase the characters who are Legends of British Steampunk.

The first figure is entitled The Commodore and Darwin, a bearded figure clad in a stylized naval uniform and silk scarf, suitable for duty as both wet and air navy. He’s striking a thoughtful pose, whilst some type of quite alien-looking creature nestles at his left leg. The fact the creature sports a folded table napkin suggests he may be a servant or waiter.

The next figure is entitled Jack Union, a fine figure of a Victorian chap wearing a diving suit, or possibly a spacesuit. He is depicted with pen in hand and paper on his knee, foot resting upon the severed head of an aquatic or alien creature. Perhaps he is reporting on his latest exploit or writing another chapter of his memoirs.

In contrast, the next figure sports a patched outfit, a lady perhaps fallen on hard times, a character carrying a tray of food and drink. However, the miniature also comes with the option to replace the tray with a swordstick, suggesting that there may be more to this diminished seeming lady than meets the eye.

The final figure is one of the true heroes of the British Steampunk scene, that fine and noble gentlemen known as Professor Elemental, clad in his trademark safari suit, shorts and pith helmet. Of course, he carries a cup of brown joy, that Empire building fluid, tea, and finishes off his ensemble with a Bavarian pipe, useful for smoking and blowing bubbles in equal measure.

These are fun figures that have a degree of character. They would be useful for those looking to add a touch of the avant garde to their VSF collection, with a nod to the skirmish and RPG markets. There are a number of other figures in this range, all of which epitomize the positively eccentric world of brass and goggles that is Steampunk.