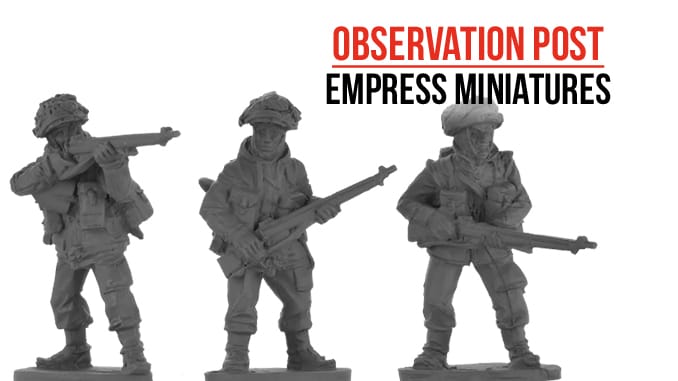 Empress Miniatures have worked with the incomparable Paul Hicks to add some extremely characterful miniatures to their 28mm World War Two range. Intended to represent typical British infantry of the Late War (Winter 1944 / 5), these figures could also feature in conflicts up to the late 1950’s.

These figures are wearing the new Mark III assault helmet, used by many British and Commonwealth troops from D-Day onwards. They all wear leather jerkins and some wear the camouflage ‘windproof’ smocks and over trousers. They come in packs of four figures as shown. These particular packs are armed with Mark IV Lee Enfield .303 rifles and some carry additional kit such as spades, pickaxes and similar. A third pack consists of a moving and firing Bren gun team.

These are just excellent figures, with some real attention to detail. They can also be used for British troops in the Korean War or any other conflict up until the late 1950’s.