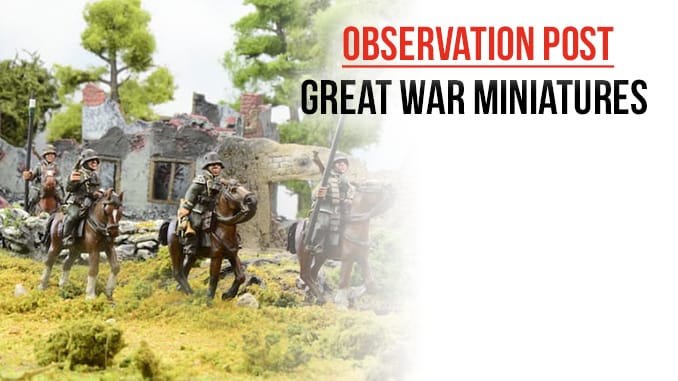 The choice to produce mounted late war cavalry is an unusual but useful one. Each figure wears the stahlhelm and the eight troopers carry rifles slung across their backs. The officer and bugler miniatures have a pistol and bugle respectively, with the bugler himself wearing a lightly more ‘ornate’ uniform.

The troopers all come with a separate arm carrying a lance, not something one thinks of for cavalry of this period but still a useful weapon for use during a breakthrough. The troopers have a range of equipment on show, two of each pose with either bandoliers of ammunition, blanket rolls, gas mask cases and deployed gas masks around the neck.

These figures are up to the usual high standards gamers associate with Great War Miniatures and would make an interesting addition to any WWI gamer’s collection. Let’s hope we get to see even more from the company in the not too distant future.