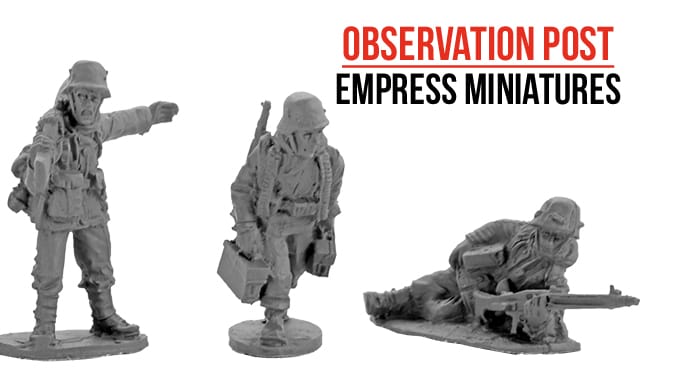 Empress Miniatures continue to add to their excellent range of Late War German Volksgrenadiers on a regular basis. One of the most recent packs provides some light machine gun support to what is already a well-armed range of figures.

The pack sent for review is VG13, MG 42 teams moving and firing. These wear the Winter smocks, trousers, equipment, ankle gaiters and short boots typical of the late war Wehrmacht, fighting to resist the Soviet assault on the ‘Eastern’ front, which was becoming increasingly Western by this time! They could also serve in the forests of the Ardennes, attempting to push back the Allied forces in Belgium.

The moving MG42 team has a standing figure with MG42 over his right shoulder, using his left to beckon with his hand. He could actually be calling for the running loader, the number two on the weapon, who carries two ammunition boxes and still has a belt of the same around his neck.

The firing team is actually in the process of getting set up, with the ‘firing’ figure in the process of reaching for something in a pouch, The number two holds a pair of binoculars, resting on an ammunition box, one end of a belt ready to be fed into the MG42, perhaps observing the enemy advance.

These are well sculpted figures and have a nice sense of ‘narrative’, something missing from other ranges these days. Although they are realistically proportioned 28mm miniatures, the quality of the range overall so far makes it well worth re-investing in these figures over some of the other late WW2 German army figures out there.