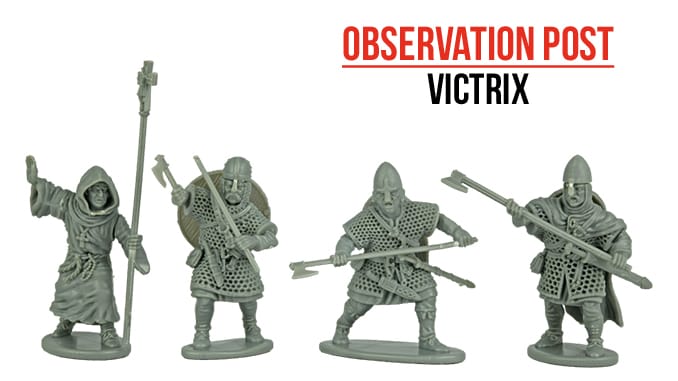 Samples of these multi-pose Anglo-Saxons miniatures  from Victrix have taken a while to get to us (they were released in November 2019), but they are still well worth taking a look at.

The two sets of plastic miniatures are great for those looking to create large armies for the Dark Ages or more fantastical battles. The ongoing releases for the Swordpoint rules, the Hail Caesar Shield Wall supplement, plus many more, all need plenty of figures to create larger forces. In addition, Warlords of Erewhon, Oathmark, Kings of War III and a host of new or upcoming fantasy rules need large units of miniatures thanks to their ‘rank and flank’ approach. With enough parts to create 60 warrior miniatures and 36 Huscarl miniatures across the two bagged ‘packs’, you can easily field an entire army for most games.

Victrix continue to produce their miniatures in a top quality plastic which makes for  sturdy, solid, hyper-detailed figures. The 3D design process used is seemingly able to reproduce the original renders in almost exactly the same high quality fashion as those originally represented – with a Victrix model, you can be sure that the render you’ve seen will become a top quality figure on a frame.

Secondly, although there were misgivings about some aspects of the original Napoleonics released by the company, these latest figures show how much has been learnt. The figures themselves have a deliberate ease of assembly, whilst still retaining the flexibility and options that gamers want. In fact, that is one of the many USPs for these and the other recently released plastic figures from Victrix – simple to build, plenty of options and a quality of detail that usually surpasses that of their metal equivalents.

Once, plastic miniatures were a way to ‘bulk out’ a mainly metal army for tabletop use. Now, Victrix and other companies are producing plastics that could and should be considered army builders themselves – you can build the figures you want, from command to rank and file, and never  use a single metal miniature.

Compared to the excellent Imperial Romans I will (honestly!) assemble one day, these Late Saxons / Anglo Danes are even better, begging the question: what can Victrix do next to top them?