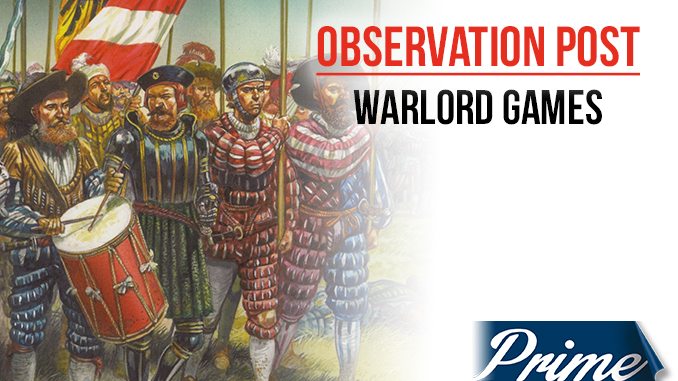 There are six sprues in the boxed set, allowing you to create 30 pikemen and a command unit of a commander in full or part armour and the option to field a drummer or standard bearer using some of the standard figures. There is also the option to field 24 pikemen and 5 arquebusiers, demonstrating the development of the more ‘combined arms’ approach adopted by these mercenary soldiers.

The figures are all depicted in typical Landsknecht outfits of the time, some with obvious breastplate armour and some without. Although there are a choice of heads on the sprue, all the pikemen are designed to be in the same pose, carrying their pikes upright on the right shoulder. They are consequently very simple to assemble, allowing you to rapidly complete a unit.

The box also includes a guide to the Landsknechts and a number of colour banners that can be cut out and used. Both the box and the guide sheet contain some colour references for useful as a painting guide but the main piece of advice is to think ‘outlandish and colourful’ when picking your palette.

Like all plastics, these are designed to be fielded in massed ranks and are an inexpensive way to bulk out your army. However, a lot of thought and detail has gone into the design of these miniatures and they are sufficiently varied to allow you to field unit after unit without too much duplication. A useful set for those looking to find a cheaper way to get plenty of pikemen on the table.