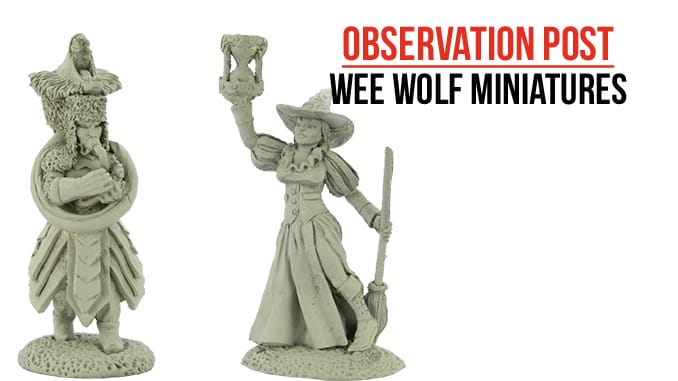 Wee Wolf Miniatures is an American manufacturer which offers a number of quite eclectic ranges, from Franco-Prussian War French to World War One Russians. However, they have recently released something familiar but different, the beginnings of a range from a world you’ll recognise but from an angle you may not have thought of.

The Land of Awez is a realm of battle and conquest, resistance and magic. Some of the first releases are for the Army of the Witch of the West. These are male and female troops clad in winter weather clothing, with fur hats and layered greatcoats. The weapons employed are a mix between black powder and the more medieval, with muskets, grenades and long barrelled punt guns alongside swords and pole arms. These are vicious looking warriors, with cruel faces and a determined air.

At the head of this army is the Witch of the West herself, who follows the ‘why change a classic look?’ school of fashion. She holds aloft a large sand timer, perhaps counting down the grains until the end for someone?

A musician is a part of the command set, blowing a horn whose ‘mouth’ is a deranged looking monkey face.

The punt gunner team consists of a VERY long barrelled weapon and a crew member who is ready for the report of the weapon.

The basic soldiers may be ‘deployed’ armed with a short barrelled musketoon or a viciously bladed polearm, having been modelled with an open hand.

These are very well sculpted miniatures with a real sense of ‘Baumian’ character. However, the Land of Awez should not be considered an obvious one – future releases may well take a different direction, as suggested by some of the single figure releases to be found on the Wee Wolf website.