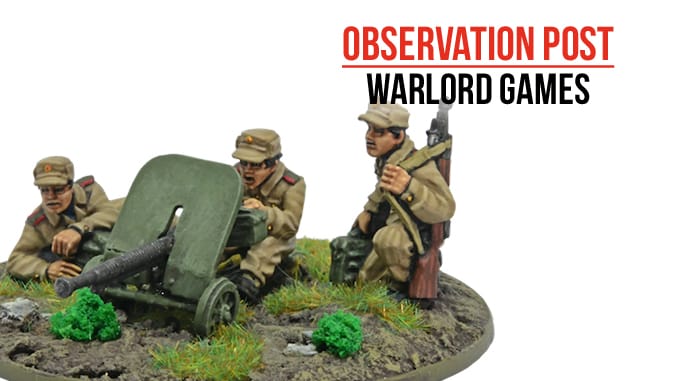 Warlord Games have taken a step beyond World War Two into a new era for Bolt Action, the Korean War. In addition to an eagerly awaited supplement-cum-rulebook, Warlord have a number of 28mm miniatures that they will be releasing to support gamers looking to re-create battles from this important, but largely forgotten, war.

The first releases in the figure range cover the North Korean and Chinese armies, plus the British and Commonwealth forces.

The Korean People’s Army wear the higher, more Germanic looking field cap, and there are infantry and infantry support options available, such as this machine gun and mortar team.

To prove that Warlord are committed to providing the widest range as possible, there is also a Type 55, a Chinese copy of the Soviet BTR-40 APC. These were exported for North Korean military use, as shown here.

The Chinese People’s Liberation Army are represented by a number of infantry packs, shown here with the flatter, ‘Mao’ cap. These are armed with a myriad of weapons, from rifles to the PPsh-41 SMG, the DP-28 LMG, Maxim MMG and flamethrowers. Hard hitting shock troops, the Chinese army’s main tactic was to throw endless waves of troops at a target.  But they also employed their own support weapons, such as mortars

The British and Commonwealth forces’ contribution hasn’t been forgotten, with a number of infantry in summer uniform, complete with bush hats, green tropical uniform and pretty much the same weapons as WW2. Also offered is a Centurion Mark III tank, something you don’t often see in 1/56th scale.

Lastly, moving away from the strictly historical, Warlord Games have done something they are good at, offering something inspired by film or TV. IN this case, we have the cast of the 4077th MASH unit, depicted in all their glory, from ‘Hawkeye’ Pierce to Colonel Potter and Major ‘Hotlips’ Houlihan. Excellent stuff!

The sheer amount of items in this initial release suggests that Warlord are ‘all in’ for this post-WW2 conflict, which may be a taste of things to come in the future. It’s good to see that they have begun with a war that is too often ignored, and I for one look forward to seeing the accompanying rulebook and future releases.