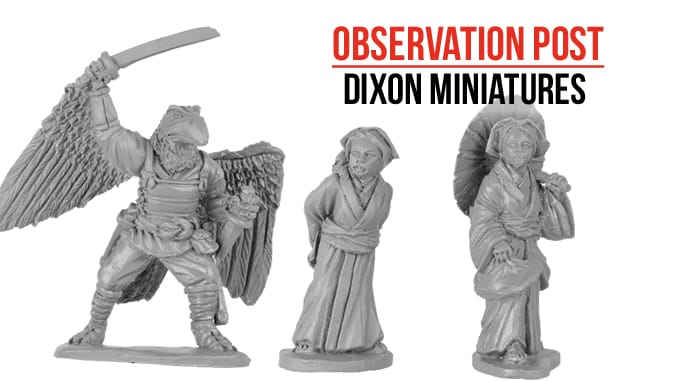 Dixon Miniatures have a number of fairly ‘venerable’ ranges which offer good quality sculpting at a reasonable price. In amongst the more historical 28mm Samurai is the Legends of Nippon range, which covers much of the mythology of Japan.

One of the aspects of the historical range that is particularly useful are the various civilian packs, allowing you to populate your tabletop with more than simply warriors. Shown here are three examples of Japanese women, dressed in the standard dress for their class, with the peasant carrying a child on her back, the girl carrying produce in a basket and up to the more refined woman with a parasol.

The next two figures are from the Legends of Nippon range, which covers much of the mythology which underpins the Japanese way of life. These are Tengu, the half human, half bird warriors that are just one of the species to be found in the ancient stories. Clad in lacquered armour and wielding bladed weapons, these are quite action packed sculpts. They are just a small part of the much larger range, which includes the troll-like Oni, goblins and much more.

These are well sculpted figures that are pleasingly different or unique, from a company that has been established long enough to have built up whole, complete ranges rather than still growing them. Dixon is always worth checking out for those looking for pretty much everything the gamer can need in one place.