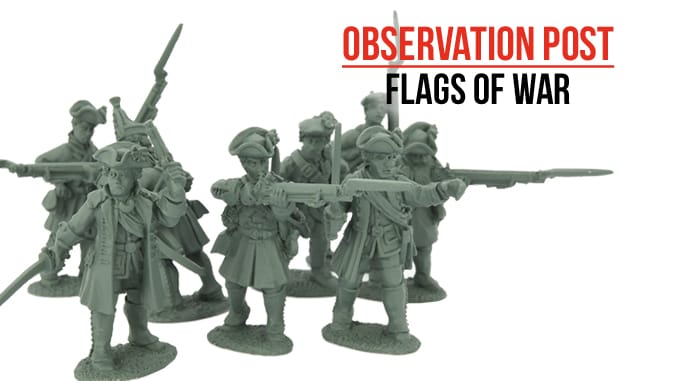 Flags of War in the UK have released more miniatures for their excellent Jacobite Rebellion 1745 range. The latest upcoming release covers a number of different Government troops to take on the Jacobites who were previously released after a successful Kickstarter campaign.

These Government Infantry are dressed in campaign style, due to the timeline of the Rising (August 1745 – April 1746) and the type of weather in Scotland. It’s pretty cold from September to September in Scotland and Iain Macdonald’s vision, a soldier would be trying his best to keep warm and not in his parade ground best. This means the figures have unbuttoned tails of their jackets and the breast is buttoned up. The Highlanders are p in the plain red coats they wore pre-Seven Years war and the great kilt.

The level of sculpting and overall ‘look’ of the miniatures is excellent, with useful attention to details in terms of the poses, clothing and weaponry. Each element looks like a ‘real’ soldier of the period, with varied kit layouts.

Once again, Flags of War have run a Kickstarter campaign with a quality set of products at the end of it. This ever-increasing range is rapidly becoming one of the best on the market, with enough variety and scope to provide the gamer with all they could need for this battle between government and nationalism.