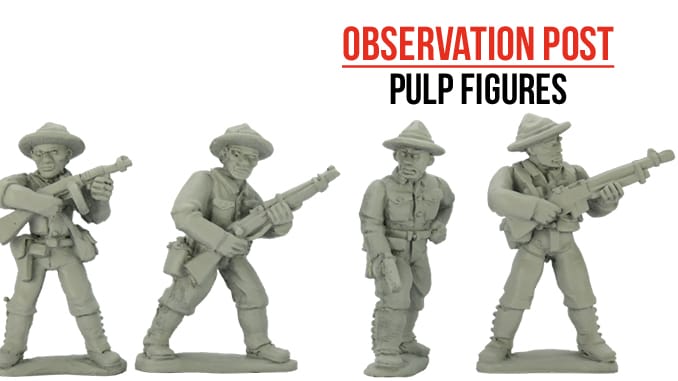 Pulp Figures is pretty much ‘the’ place to go for top quality Pulp era miniatures. Recently, owner Bob Murch has been re-camping some of the older sculpts and adding more to the range. The 28mm Inter-War U.S. Marines range has seen the addition of a number of packs, of which we have two for review.

The first pack is PYS 08 and is entitled U.S. Marines / Tropical / Montana Hat 1.  There are 5 figures in this set, dressed in standard tropical uniforms with boots and gaiters. They also wear the Montana hat, the wide brimmed favourite of the standard US Marine Gunnery Sergeant according to popular movies and TV. Each figure is armed with a different weapon, so we have a BAR, Remington shotgun, .45 pistol, a Springfield rifle and a Thompson submachine gun. These guys could be Marines based at the ‘China Station’ or any other location in the Pacific during the 1920s and 30s.

The second pack is PYS 13, entitled Marines/ Tropical/ Tin Hats 2. These Marines are wearing the same uniforms as the previous pack but the addition of the ‘soup bowl’ tin helmets make them look more ready for war. A BAR gunner, Lewis Gun team and two Thompson submachine guns suggest these Jarheads pack a punch. This is a pack that could be useful for games set during and around the early part of the War in the Pacific, holding off the Japanese invasion of the Phillipines or similar.

These are just two of the packs from the range, and Bob Murch’s sculpting style makes them positively Pulptastic whilst retaining the historical accuracy of equipment, weapons, etc.

Available in the USA and Canada from Bob himself at https://pulpfigures.com, you can also find these fine products at: https://www.cruciblecrush.com or, if you’re in the UK or Europe, visit www.northstarfigures.com