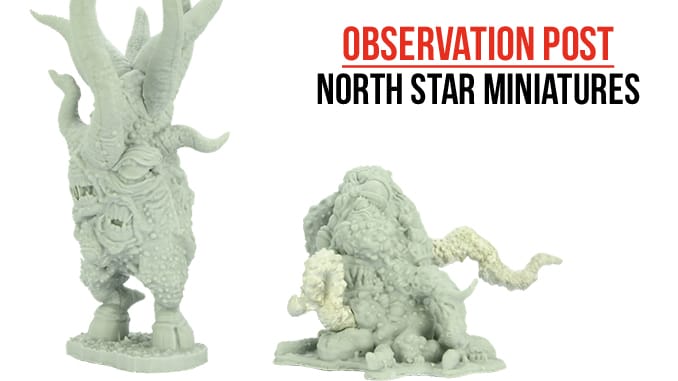 North Star Miniatures have a range of miniatures which take the generic title ‘Horror’. It’s an interesting and eclectic range of single figures and packs, which embraces much from spooky literature and movies.

One of the classic horror genres was largely invented by the author H.P. Lovecraft, who explored the realms of the Elder Gods and their servants.

The Shoggoth is a shambling, barely formed protoplasmic creature which is able to move across a number of different surfaces both horizontal and vertical. There is one model in each pack. The main body is made from a tough resin, with two extra tentacles in metal that need gluing in place.

The second figure is the Dark Progeny of Shub-Niggurath is the twisted, be-tentacled offspring of the dark deity Shub-Niggurath. On cloven hooves and with gaping maw, this foul creature strides forward on its parents bidding. This figure is cast in tough resin, with a built-in base and two separate tentacles that need to be glued in place.

These eldritch horrors are based upon the descriptions of the same to be found in Lovecraft’s stories. Consequently, they are ‘accurate’ representations of the established likenesses of two of the most bizarre beasties that ever graced the world of literature and gaming.