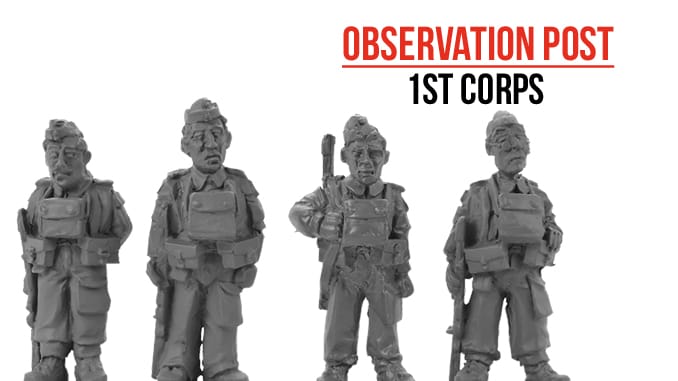 1st Corps and top sculptor Mark Fuller have combined to produce another new range under the 1st Corps label, this time focusing upon the ‘Home Front’ during the 1930’s and 40’s in the UK.  The first few packs are members of the British Home Guard and could prove useful for those looking to re-create an Operation Seelowe scenario.

The two packs we’ve decided to review are HF02 which depicts four members of the Home Guard on sentry duty and HFo4, four figures firing their rifles.

The figures have typical equipment of the period, with the slightly older pattern equipment, sidecaps and denim uniforms issued to the Home Guard units. They also have the gas mask case on their chest, showing their early war / Home Front status. However, the fact that they all have Lee Enfield Mark III rifles means these figures could also be used on the frontline in 1940, perhaps older Regular soldiers who’ve served between the wars.

In keeping with Mark Fuller’s style, these are quite large, chunky miniatures, between 28 and 30mm foot to eye. However, this means they are a treat to paint up. These are really characterful miniatures, with individually sculpted faces, possibly created from real likenesses.

These are nicely sculpted miniatures. They have a true sense of character and, with 5 packs available so far, could function as a single unit on the tabletop, with one of the packs being Vickers ‘K’ and Lewis Gun LMG teams. Future releases include some more of the same, plus civilians and others.