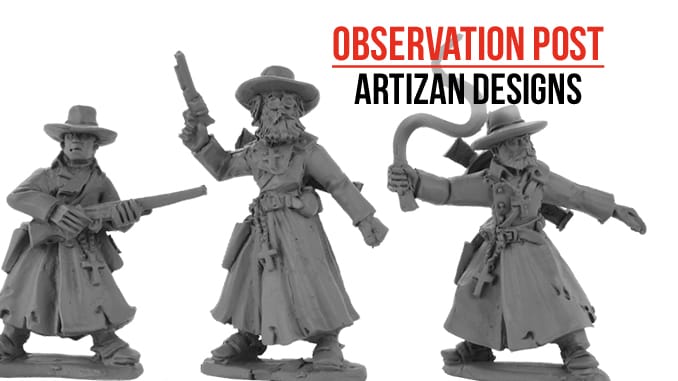 Mike Owen of Artizan Designs has added a new pack of three figures to his Grim Prairie Tales range, introducing some characterful figures into his own Weird West background. These are three representatives of the Catholic Church, sent to the USA to battle the forces of unlife and those dedicated to the Dark Arts.

Each figure is dressed in long, quite tattered robes and wears a wide brimmed hat. All are armed with a revolver and a ‘long weapon’.  One wields a double barreled shotgun, whilst the others have a scabbard across their backs from which the stock of a weapon protrudes. A heavily bearded, bespectacled figure holds a sixgun aloft, whilst the last is posed with a whip. All sport symbols of their faith, and the three together look like the type of tough men of faith that could be largely unexpected.

This is another one of those chracterful figure sets that Mike Owen excels at, with each figure pretty much representing just part of a wider story. We can only hope for more in a similar vein fairly soon.