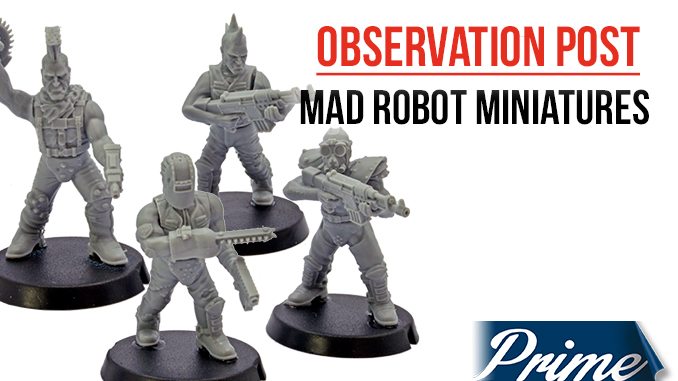 Mad Robot Miniatures is an American company which specializes in providing resin parts to create or customize miniatures. We were sent two sets of miniatures from just one of their ‘mix and match’ ranges.

The world of customizable resin parts has seen a great deal of growth in recent years. Although designed to be added to other company’s miniatures, most manufacturers have also begun to provide complete units that simply require assembly to be painted and fielded on the tabletop.

Mad Robot has some of the most cleanly cast resin parts that we’ve seen. In the Post Apoc range, as in the others available, you can opt for a choice of torsos, arms, weapons and heads as required. These include heads with outrageous hairstyles, re-breather masks, and more. The torsos are suitably PA themed, some with the touch of the wasteland or road warrior about them. There are also arms with close combat weapons, pistols and rifles.

The parts may be assembled very easily and only need minimal cleanup. They need to be fixed with superglue or similar adhesive but the fit to one another is very good, just needing some thought on positioning at times. Although in scale with the other parts, the weapons are very sturdy and don’t suffer from the brittleness of less robust resins.

These figures and parts are excellent examples of the resin offerings that are available from a host of manufacturers. Mad Robot also provide parts for Heroic Scale Sci-Fi figures and a custom squad builder where you are entirely free to create exactly what you want. As an option for the conversion minded and those who like their own unique miniatures, this is a company that is well worth checking out.