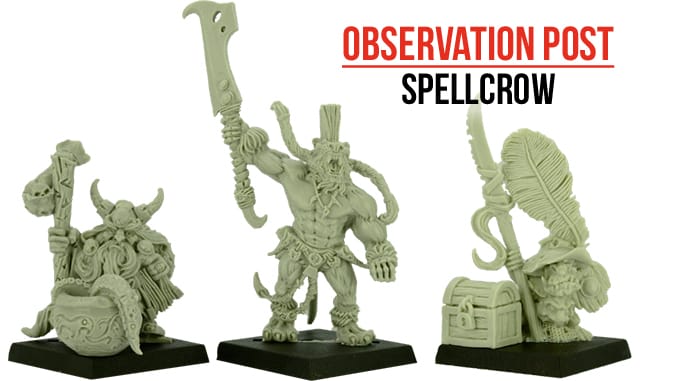 Spellcrow, a company based in Poland, produces a number of ‘heroic’-sized fantasy miniatures. These are most relevant to their two fantasy game settings but are also useful for other systems as well.

For the Umbra Turris city exploration and skirmish game, we have a Tigerian with Two-Handed weapon and a Goblin with Big Feather.

The Tigerian is a race unique to the Spellcrow universe, a vicious looking anthropomorphic big cat. An overly muscled barbarian type, he holds a primitive looking sword above his head, but this is a warrior with built-in weapons, teeth and claws, ready to rend as required. The figure comes with a separate feline tail which must be attached.

The second figure is entitled Goblin with Big Feather. This is fairly standard looking Goblin sporting a polearm and wooden shield. However, his headgear has a touch of the Renaissance era about it, especially as it is surmounted by a huge feather. He could be a guard of some sort, perhaps evidenced by the addition of a small money chest on the sprue.

The third figure is for the mass battle game, Battle for Morten. Entitled Northern Dwarf Warlock V.2, this is a fairly standard looking Dwarf but with a touch of the Druidic about him, a magic user schooled in the Light and Dark magic that can be used on the battlefield. The rune covered staff and the decorated cauldron are aids to the conjuration process, which, judging by the strange tentacles which writhe in the cauldron itself, could be a boon or a curse.

All these figures have been cast in a high-quality resin and are very detailed. There are a host of other figures available from the company, either as single figures or in ‘army deal’ packs. Like so many companies in Poland and beyond, the game concepts and sculpts deserve a wider audience.