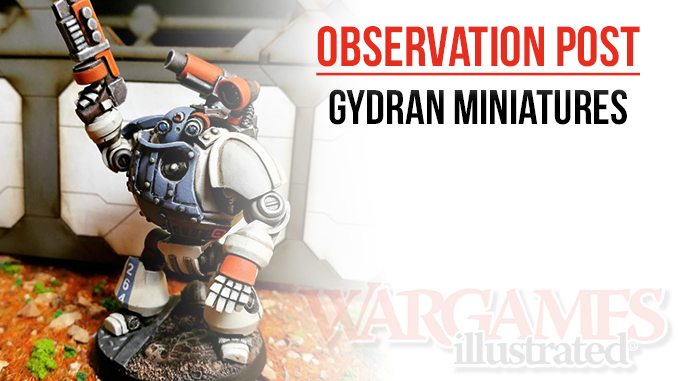 A new company, Gydran Miniatures, has appeared on the market with a slightly different take on sci-fi heroes, slightly retro but innovative at the same time.

The miniature we have picked for review is a multi-part robot provided in resin. This means you can assemble the figure in a number of configurations, allowing for maximum pose ability. The figure represents one of the heavy robots that support the Elsor-Varo, dwarfs in powered armour, during their missions. The range also includes some fairly unique models of a variety of drones and some upcoming enemies for the Elsor-Varo, the Pugwanians and others.

The overall quality of sculpting and resin casting is very good, with some nice details on the resin pieces from venting to rivets. This is a robot that means business, so we used a dangerous looking weapon and a shield for extra defence. As concepts go, there is a touch of Japanese anime meets a ‘grimdark future’ about the robot, so it could work in a number of backgrounds.