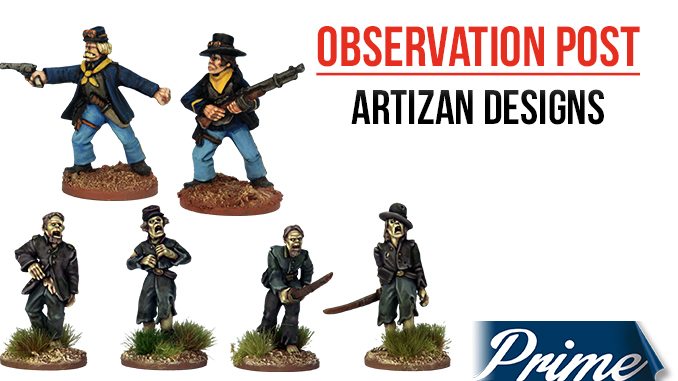 Mike Owen of Artizan Designs has created his own take upon the Weird Wild West. He’s added a Victorian Science Fiction element, blended with facets of the supernatural and practitioners of the Dark Arts.

The premise is that the Union, using chemical weapons and firebombs, laid waste to the Confederate States using airships and ornithopters. Although the Union won this phase of the war, the Union are horrified when the Southern States use the powers of Necromancy to return the dead to the battlefield. By 1870, the Southern States are a poisoned wasteland inhabited by desperate people. But Confederate necromancy has seen a resurgence, with the undead unleashed in raids on Northern border towns. The war begins again, with Union troops facing off against the risen revenants of the South’s past battlefields.

The first batch of miniatures represents the suitably psychotic Necromancer Captain Quantrell and his crazed compatriot Bloody Bill, leading a batch of zombies who are ready to devour the living. The figures are in various poses, with the zombies epitomizing the ‘shambling dead’ concept, either wielding the weapons they had in life or ripping with their bare hands. Quantrell and Bloody Bill are suitable menacing and have a great deal of characterization.

The second batch of miniatures are Union troops from Fort Purgatory, which nestles on the border and provides protection to the civilian farmers and townspeople around them. These troops all wear typical Union infantry uniform, although some wear what could be called ‘campaign dress’. However, the main differences with these figures are their weaponry. A few carry double-barreled shotguns or pistols but most carry some sort of drum magazine fed rifles. The majority wear goggles on their headgear and a couple have protective breastplates. One of the figures is armed for close combat with a pickaxe handle or wooden club wrapped in chains.

These figures would be suitable for The Curse of Dead Man’s Hand, Dracula’s America or, in the case of the Union troops, the In Her Majesty’s Name system or other VSF or Steampunk games. They are well sculpted and in suitably ‘active’ poses. Sold in sets of ten miniatures, these are an unusual but useful part of the Artizan range and hopefully the start of a whole variety of models.