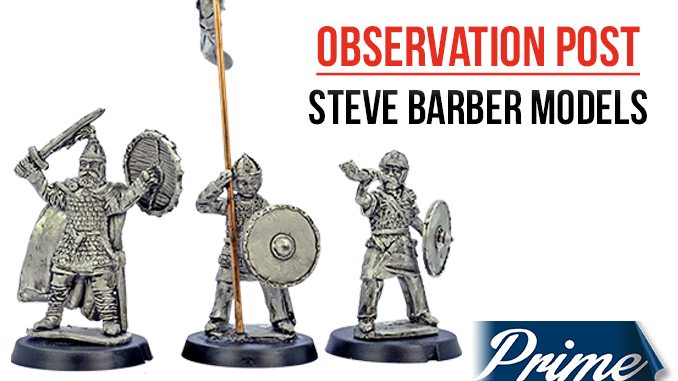 Steve Barber Models have released one of their latest aspects of their Ancients range in the form of a number of packs of Goths, those dreaded adversaries of Rome, amongst others.

The pack received for review consists of five miniatures, although one of them is best described as in an ‘inactive’ pose! This is perhaps caused by the fact that he is missing his head, which is being held triumphantly aloft by a barechested fellow. In fact, the two figures go together to create a ‘nice’ little vignette which could be used as a casualty or disorder marker when one loses a special miniature.

There is a noble or leader clad in chainmail and with suitably ‘Gothic’ helm, holding his sword and embossed shield aloft, perhaps daring his enemy to attack. This is a great pose for a commander and you can imagine the stream of orders or invective coming from his lips.

Of course, amidst the din of battle and the haze of combat, you have to know where your leader is and what actions to take. To aid in this, the pack includes a standard bearer with a banner topped by a stylized dragon or similar beast and a musician with horn to his lips, ready to call the Lord’s warriors to battle or announce the retreat.

These are great figures, which really convey the sense of being a part of a wild and vicious battle. There’s the commanding presence of the Lord and the sense of a vengeful psychosis in the severed head vignette. All in all, another high quality addition to the excellent ranges created by Steve Barber himself.