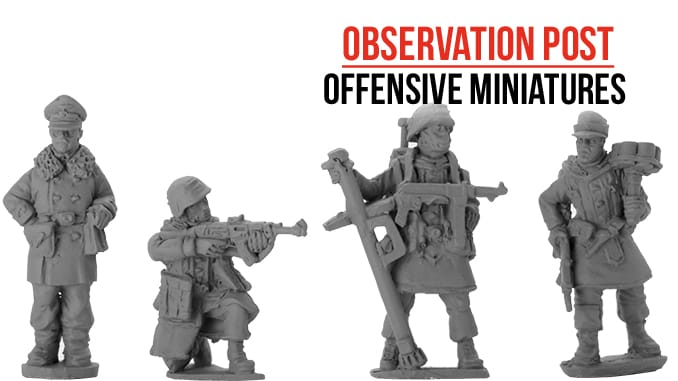 Offensive Miniatures have produced more Late War German troops. Designed for use as either Volksgrenadiers or any other Defenders of the Reich, these are a group of troops with various weaponry and equipment.

There are 10 figures in total, clad in cold weather gear and camouflage smocks. The weapons wielded by the group include KAR 98 rifles, an MP 40 SMG, a PPSH 41 and STG 44 assault rifles. There is a Panzerschreck team posed ready for action, a figure standing with Panzerschrek and spare ammunition on his back and a single figure in Feldmutz with an anti-tank grenade. There is also an officer in peaked cap complete with tailored coat and holstered pistol.

These figures are well sculpted and accurately depict uniform and weaponry. The poses are fairly natural, quite realistic on the whole, as opposed to the exaggerated appearance of some manufacturers. The figures are on the smaller side of 28mm, meaning they should fit with those from the Perry range or similar.

Another useful addition to a growing range that should aid those looking for some variety in their forces. Between these and the other figures in the Defenders of the Reich range, this range is becoming one that all gamers who use smaller figures should aim to check out.