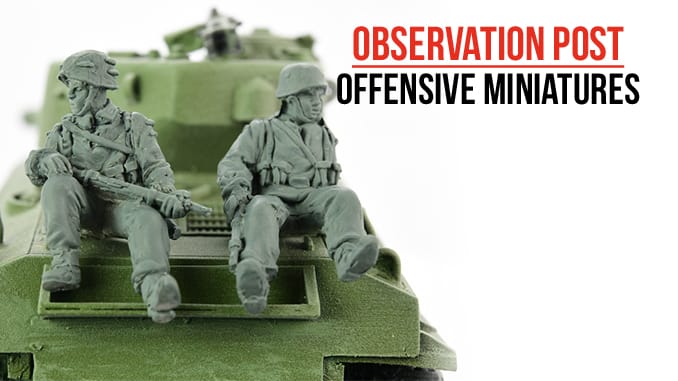 Offensive Miniatures are seemingly unstoppable at the moment, expanding their 28mm World War Two range on a regular basis. One of their latest releases is this pack of Late War German Tank Riders.

There are 8 figures in the pack, dressed in the Late War uniform of short boots with gaiters and covered helmets or Feldmutze. There is a mix of weapons, KAR 98 rifles, STG44 assault rifles, an MP40 and support weapons in the form of an MG42 and two Panzerfausts.

The level of detail on the weapons and equipment is excellent. The figures are on the ‘Perry-side’ of size, and would mix best with similar figures. Consequently, they would suit 1/56th scale tanks but may look slightly ‘malnourished’ on 1/48th scale equivalents.

The overall quality of sculpting shown on these miniatures shows that the sculptor not only has a high level of skill but knows his subject very well. The fact that these look like ‘real’ soldiers, in pose and facial expressions, means that these are suitable for those looking to re-fight battles which look like World War Two rather than a comic book appearance.