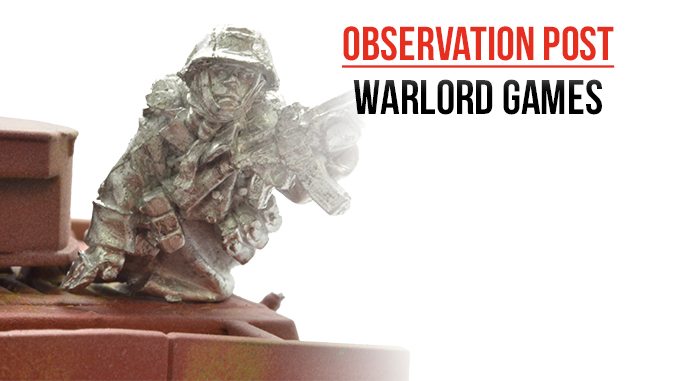 Warlord Games have added to their Winter War range of figures with something a little different for German forces.

During World War Two, it became obvious that StuG assault guns could be vulnerable to infantry assault, especially as they were used on the frontline more and more often. To prevent this, Begleit, or escort troops, were assigned to ride along with the guns. This first happened during the Battle of Kursk and were equipped with rifles and MP40 submachine guns. Once the new Sturmgewehr 44 assault rifle began to appear during the summer of 1944, these weapons were added to the mix.

The figures from Warlord are shown in winter clothing, greatcoats, smocks and improvised head protection. Two of the four figures carry Kar. 98 rifles, one has an MP 40 sub machine gun and the last has a StG 44. The miniatures are sculpted in a number of sitting or partially prone positions and could be used with the StuG III kit from Warlord or, with some careful positioning, almost any of the German tanks in the Bolt Action range.

Although a somewhat ‘niche’ subject for a set of figures, this is a pack which can add an extra aspect to a diorama or can be used as an indicator of infantry support forces being available for your StuG batterie. The winter clothing make them equally suitable for use during games set within the Battle of the Bulge or late war Eastern Front action.