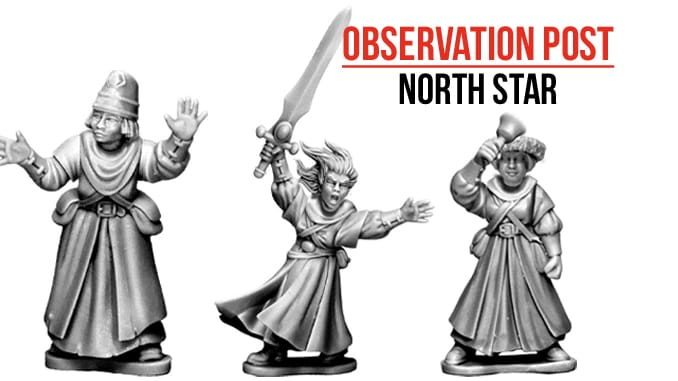 North Star Military Figures continues to support the Frostgrave rules system from Osprey Games. Along the way, the company has produced some excellent multi-part plastic figures, embracing the different facets of the game. However, in a world of ‘same old’ fantasy, the company has been innovative by producing both male and female versions of classic fantasy tropes. The most recent release is Frostgrave Wizards II, where players can finally add their own female wizards to the tabletop.

The frame pictured here is typical of those produced by the collaboration between North Star and Osprey Publishing. Each frame consists of four basic bodies in robes. These are obviously female but are part of the contemporary aesthetic, being adventurers in hard wearing clothing rather than fantasy clichés of the past.

The wealth of options available on this frame is perhaps the most interesting and useful aspect. For starters, there is the choice of 20 heads, ranging from the insane and evil to the innocent and wise. There are also 38 choices of arms, some holding weapons, some with magical items and others in various poses. There are also pouches, scrolls, bottles, a choice of cat or rat familiars, a wide variety of choices to add some unique character to your own choice of figures, almost like choosing the physical version of 3D printing sites like Heroforge, only without the waiting time, cost and plenty of spare parts for future use.

Once again, this is an excellent contribution to the world of fantasy gaming, allowing gamers to create their own heroes as they wish.