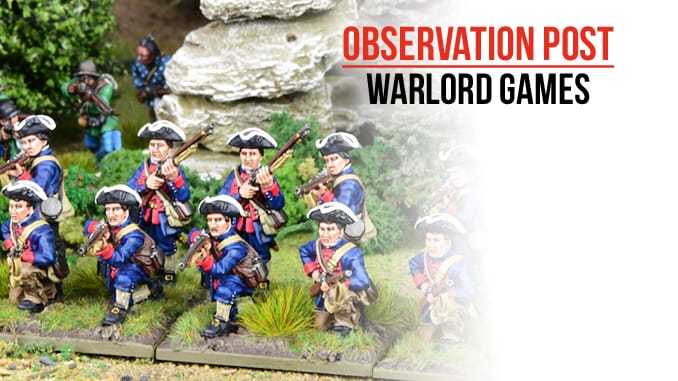 Warlord Games have put together some new unit boxes to support the recent release of their Black Powder supplement for the French and Indian Wars – A Dark and Bloody Ground.

Each of the three boxes contain 12 metal figures and acts as a ‘unit add-on’ for the larger boxed sets or the basis for a small force for skirmish gaming.

The Colonial Provincial Regiment (seen below) contains six kneeling and six standing miniatures. Each figure is either aiming or loading. The box contents allow you to put together a firing line, as you would expect from men trained in a similar fashion to British regular troops. However, the poses look equally good if the figures are deployed in a skirmish line or similar.

The next box contains 12 figures in Highland dress, as befits the tough, hard fighting Highlanders who served in the vast Canadian wilderness. These figures are all depicted as advancing slowly with fixed bayonets, probably an unnerving sight for their enemies.

Lastly, we have the Roger’s Rangers box, which consists of 11 metal men and one dangerous looking dog. This is the most obviously skirmish pose pack, with figures depicted with a number of different weapons from muskets to pistols and tomahawks.

The three boxes complement each other quite well, and could form a varied force in their own right if used on the tabletop together. The quality of the sculpting is good, with some variety in facial expressions. Those looking to get into this period would be advised to take a closer look at what Warlord have on offer, if only for the purposes of comparison with other ranges on the market.

Check out WI382 for our article on ‘Rethinking Rogers Rangers’.