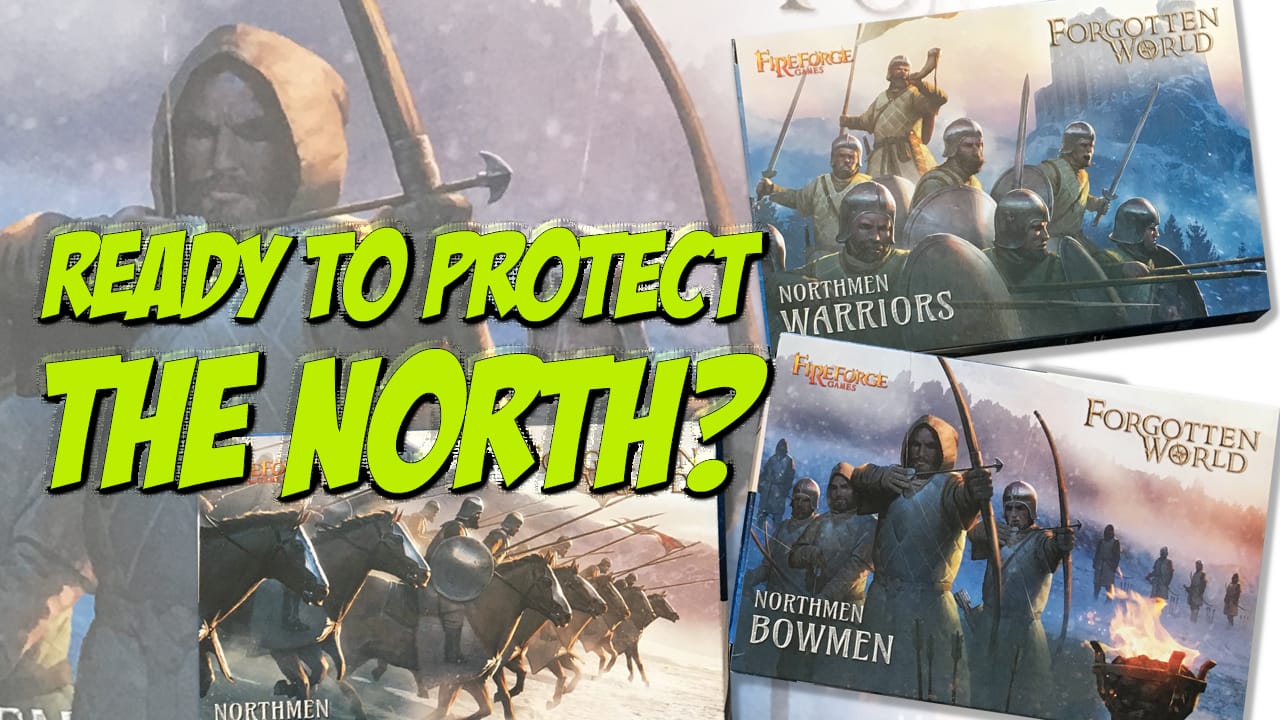 Fireforge Games will soon be releasing yet more plastic, multi-part fantasy figures for their Forgotten World concept. We’ve been lucky enough to get hold of 3 boxes, all from the Northmen range, and enough to make a compact skirmish level force for a number of games.

The Northmen Warriors box consists of 1x Command frame and 2x Warriors frames. The frames allow you to assemble 12 figures in total, either 12 spearmen, 12 swordsmen or a mix of  the first two options, 6 with spears or swords, the other 6 with two handed spears. The Command options allow you to assemble one Leader, one Musician and one Standard Bearer, complete with cloaks, standards and hunting horn. A nice touch is the inclusion of 12x 20mm square bases and 12x 25mm diameter round bases, allowing you to field ranks of troops or individual warriors, as desired.

The Northmen Bowmen box contains 1x Command frame and 2x Bowmen frames. You can assemble up to 12 figures with an arrow in the right hand, or a mix of 6 aiming and 6 who have just loosed their arrows. Another option is to create 6 figures with flaming tipped arrows, perhaps with braziers at their feet, and head options allow the creation of 4 models with a hood. The Command options allow you to assemble one Leader with sword and helm, one Musician with horn and one Standard Bearer. Again, a mix of square and round bases are on offer.

Lastly, the Northmen Cavalry box has 1x Command frame, 2 x horse frames and 2 x Mounted Rider frames. You may assemble a total of 6 mounted figures, armed with swords or lances. The figures may also be posed holding reins. The Command options allow you to assemble one Leader, one Musician and one Standard Bearer. The horse frames come with 3 different pairs of half-bodies with 3 different heads and 3 different tails, allowing for up to 27 different horse configurations. Lastly, this box comes with 6 x 25x50mm square bases and 6 x 60x32mm oval bases, again giving you basing options.

These are very nicely done figures, and all the options allow for some useful variety on the tabletop. It should be possible to create large units with the same or mixed weapon, depending on the ruleset being used. They have both a historical and fantasy look, adding to the options for the interested gamer.