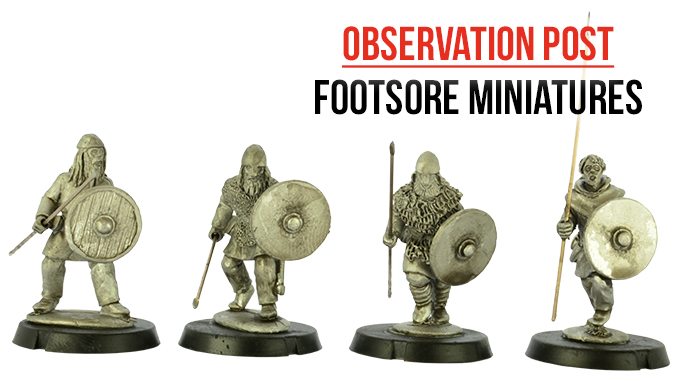 Footsore Miniatures have released the first packs in a whole new range of Vikings. From Warlords to Bondi, these are up to the usual standard of figures from this consistently high performing company.

The Warlord figure represents a generic character who would have led a band of warriors when they went ‘a-viking’. He is clad in fine mail armour, wears a full face helm and a quality fur cloak, plus the symbol of Odin himself on a necklace, showing his pagan beliefs. He wields a hand axe in his right hand, perhaps recently used to separate his latest victim’s head, which he holds aloft in his left hand.

The other four figures are Bondi, the lower level members of the warband who would most probably have been farmers or fishermen. These are the men who went on raids to satisfy their Lord’s demands for men to aid him and in the hope they could enrich themselves with a share of the loot. They are dressed in typical clothing, with the more experienced with furs and a helm and the less wealthy or those new to the raiding life in their normal clothing. All have a shield and spear but not all have yet to reach manhood, with one of the figures appearing to be a mere teenager without long hair or beard.

The quality of the sculpting on all of these miniatures is, as always, very impressive. Footsore and War Banner, the rules publication arm of the company, appear to be gearing up for a whole raft of new releases, making them a company to watch.