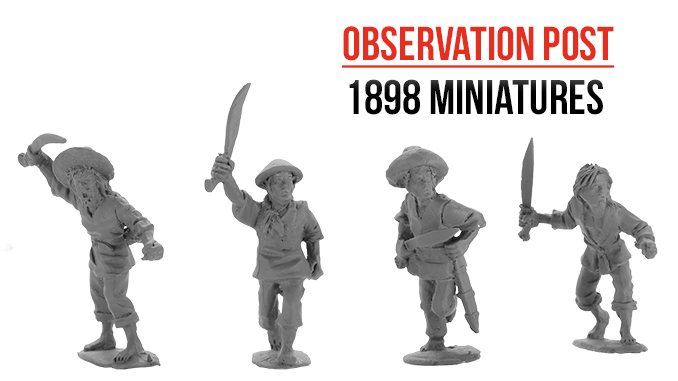 1898 Miniatures continues to produce high quality miniatures for the wars in the Philippines. They have recently added to their range of Filipino Tagalog ‘insurgents’ with two new packs, Tagalog with Mixed Weapons and Tagalog with Bolos.

The Mixed Weapons pack consists of six figures armed with a variety of weapons. There are archers, bamboo spearmen, a crossbowman, and a figure armed with a Filipino headhunter’s axe. These are typical of the Filipino insurgents that fought against the Spanish and the Americans, as firearms were in short supply.

The Bolos pack also consists of six miniatures, this time armed with the traditional Filipino Bolos knives, a vicious weapon with a double-edged blade.

All these miniatures wear traditional peasant clothing and headgear and are in a number of fairly animated poses. The faces on some of the miniatures are very well done, down to facial hair and the determined expressions. These are men fighting for their freedom from oppression, not just bland faced warriors.

The standard of sculpting and casting on these miniatures continues to be high. The overall variety of miniatures in the range enables gamers to produce an increasingly varied force which may be used for actions against both the Spanish and American forces which make up the range. Great figures from an expanding company.