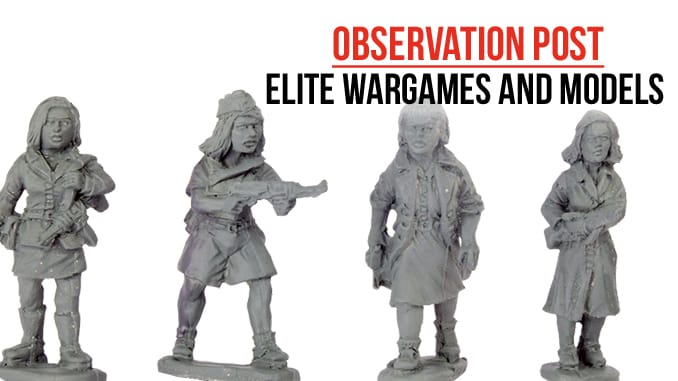 Elite Wargames and Models specialize in offering 28mm female figures for three main periods, Dark Ages, Napoleonics and World War Two. The first are female Dark Age warriors, the second are a more ‘fantasy’ version of Napoleonic warfare, but the last pays homage to the female fighters who fought for their nations.

Having already released a German anti-aircraft gun crew and a selection of Soviet snipers, the most recent pack is based upon those brave women who signed up as Resistance fighters in World War Two.

There are 5 figures in total, armed largely with captured German weapons such as MP40 sub machine guns and KAR 98k rifles. They wear a variety of different clothing, either strictly civilian or a few items of military attire and equipment.

The sculptor has used actual World War Two photographs as a reference point, as can be seen in particular by the figure in military sidecap and firing an MP40. This is based upon a famous French resistance fighter, Simone Sequion, who was active throughout World War Two.

These are well-sculpted figures in a more ‘chunky’ style, so will fit in with some of the more modern ranges. They are a welcome addition to the options available for the interested gamer and will hopefully be followed by more figures which remember the women who served.