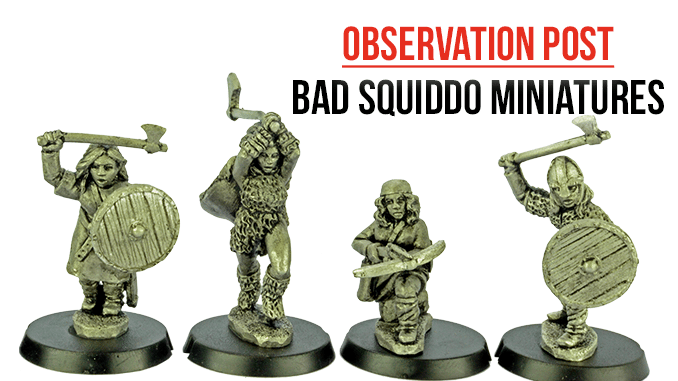 Bad Squiddo Miniatures produce figures themed around female warrriors. One of their most recent successful Kickstarter campaigns is entitled ‘Freya’s Wrath’, a series of Dark Age warriors with a touch of historical reality blended with Norse mythology.

The range includes Berserkers, Hearthguard, Archers and Bondi warriors, plus a number of personality figures. We were lucky enough to get our hands of a example from each of the four figure packs that have yet to be on general release.

The Berserker is an imposing warrior, clad in bearskins and charging into action wielding a Dane axe.

The Hearthguard warriors all have hand weapons, mail and helmets and carry a suitably robust shield as shown here.

The Archers wear no armour but carry longbow and quiver, posed either drawing an arrow or preparing to loose at the enemy.

Lastly, we have the Bondi, with only a shield for protection and a hand weapon.

These are all very well sculpted miniatures, with appropriate clothing and equipment for the era. A nice touch are the braided hair on some of the figures and the attention to detail that aims to produce realistic warriors rather than caricatures. These figures will be available after the Kickstarter pledges have been fulfilled, at Salute this year.