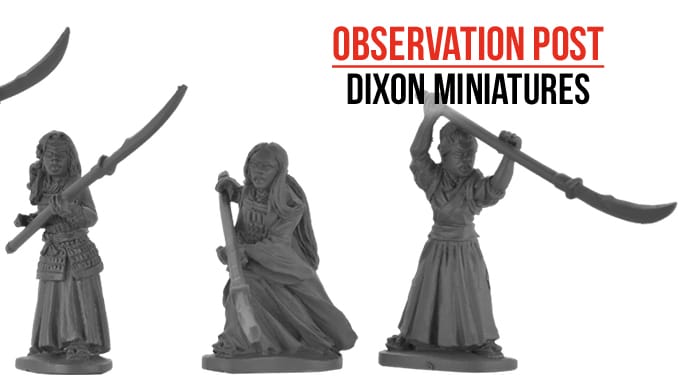 The Onna-Bugeishia were female warriors drawn from the Japanese nobility. They were trained in the use of weaponry (most commonly the naginata – a curved-bladed pole-arm) and were called upon to defend their communities and families in time of war, usually when male fighters were lacking.

Dixon Miniatures have added a pack of four 28mm Onna-Bugeishia figures (£8) to their large ‘Samurai and Legends of Nippon’ range. All four come armed with separate naginata weapons and are unarmored or only lightly armoured  – making them very versatile in terms of the ‘Samurai’ period for which they can be used.

Unlike early sculpts in this range, which were characterised by a ’squat’ look, these modern Dixon figures are slight of build and realistically proportioned, in a Perry Mins style. They are slighter in fact than the Warlord Games, Test of Honour Onna-Bugeisha, but have similar dynamic poses, so will mix in pretty well.

Crisp castings with nicely fitting weapons these four Onna-Bugeishia would look good in Test of Honour, Ronin or other ’Samurai’ skirmish game.

Find out more about the Onna-Bugeishia here: