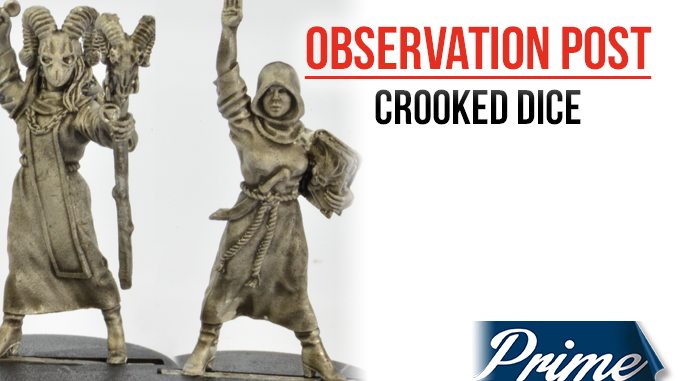 Crooked Dice have once more added to the generic ranges they now offer, producing a four figure pack of female cultists with a penchant for occult Devilry.

The figures wear typical ‘cult-esque’ robes, three of which have suitably mysterious cowls to hide within.

One of the figures goes further than the others and could be considered the leader. She wears what looks like the top half of a goat or sheep’s skull on her head, carries a mystical staff bedecked with the same and various arcane symbols and wields a sacred knife with a crooked blade.

The next clutches an evil looking tome to her left side and is posed seemingly mid incantation. She has a curved dagger tucked into the cord around her waist and is obviously a person of note in the cult.

The last two models appear to be basic cultists posed ‘in action’, one running forward wielding a vicious looking blade and the other poised to strike with a wooden cosh or similar.

These miniatures would fit into a whole variety of settings, fantasy, Pulp or perhaps even sci-fi as the depraved worshippers of a futuristic cult. As has become standard, they are excellent sculpts from Ernst Viengart and are hopefully the first of many in a similar ilk.

Grey For Now – Test of Honour: Samurai Warband and extras