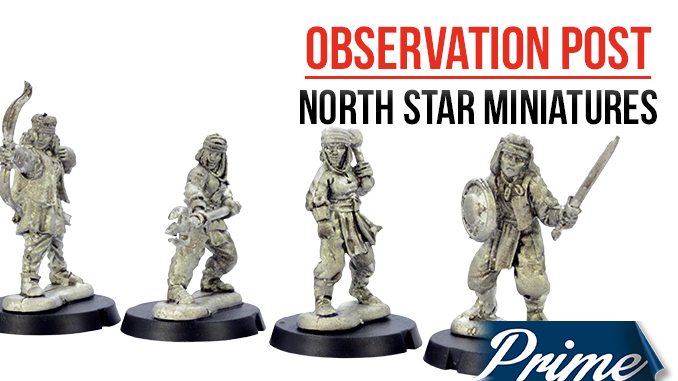 For use with Frostgrave: Ghost Archipelago, these female miniatures are designed to represent some of the standard supporting Crew members.

The first release consists of four figures, armed with a range of weapons. One wields a trident, the next a sword and shield, one with a hammer or mattock and the last with a bow.

Each figure wears clothing in the fairly eastern style, in company with their male counterparts. These are sensibly attired fantasy females, whose female attributes are less important than their abilities. It is a refreshing change to see well-sculpted warrior miniatures that just happen to be women, rather than being the overly exaggerated products of a puerile fantasy.

These are metal miniatures, whereas the majority of the Crew figures available are plastic. Consequently, unless you are willing to undertake some figure converting, ‘what you see is what you get’. The trident serves as a two-handed weapon, the sword and shield covers the hand weapon and shield option and the hammer can serve as a basic hand weapon. However, the archer model could also serve as one of the Specialist crew members, adding some long range firepower.

These are well-sculpted miniatures, with an emphasis on the female. Given the nature of the game background, they are a logical extension of the types of characters who have the spirit of adventure.