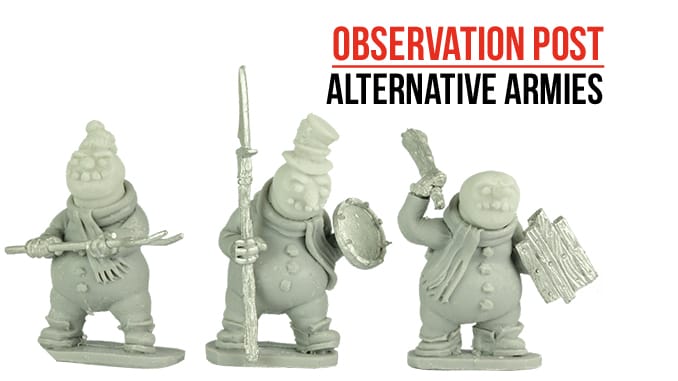 Alternative Armies have something suitably festive for your tabletop, although these snowmen are less interested in walking in the air than they are in tearing their enemies apart.

There are three figures in this pack, consisting of a resin body, separate resin head and a choice of metal hands wielding weaponry.

Each figure has the appearance of the type of perfect, cartoon-ish snowmen, complete with scarves, hats, carrot noses and coal for mouths and eyes seen in movies. However, these are not really suitable for that Disney-like scene.

Instead, these snowmen have wicked scowls and wear heavy boots, and come armed for combat. Whether you give them a spear and shield, club or a pitchfork, these frozen warriors are ready to take on all comers, whether living or perhaps magically animated as they are.

This is just one pack from a whole number of ranges on offer from Alternative Armies, who have their own unique take on fantasy Napoleonics, sci-fi and much more. These is also a 15mm Festive Season range with such highlights as armed gingerbread men and Psycho Presents that offer something different for your armies.