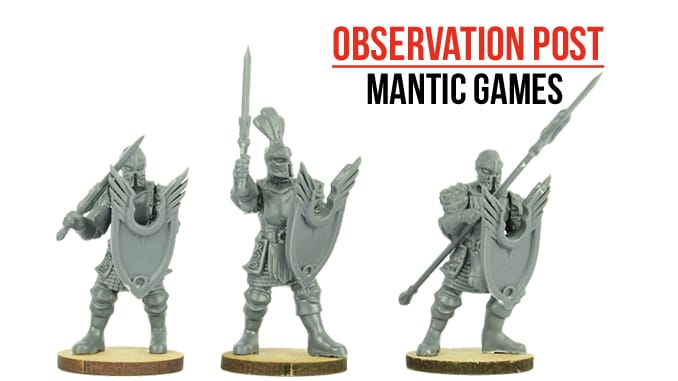 Mantic Games have decided to re-release one of their Basilea sprues as a Webstore Exclusive. Originally released back in 2013, there are a wealth of options available for those looking for armoured human warriors, with a fantasy flavour.

The single frame on offer has enough parts to create 5 warriors in chainmail with surcoats. Each figure wears a helm, with armoured gauntlets and stylised sections of plate or segmented armour over vulnerable areas such as the shoulders and elbows. There is a plumed helmet to enable the creation of a leader type.

A variety of ranged and close combat weapons are available on the frame, including crossbows, two-handed spears and a sword and shield combo. All of these are in the ‘high fantasy’ style, making these perfect for use in games of Kings of War, Dragon Rampant or similar.

Obviously, to create a larger unit, one needs to buy additional frames, but the cost of a single sprue is low enough to make it worthwhile. In fact, as a webstore exclusive, you could add a few to your shopping cart just to reach the next level of discount this Black Friday or Cyber Monday! Good quality figures, with some nice options, just right to bulk out your frontline human fantasy army.