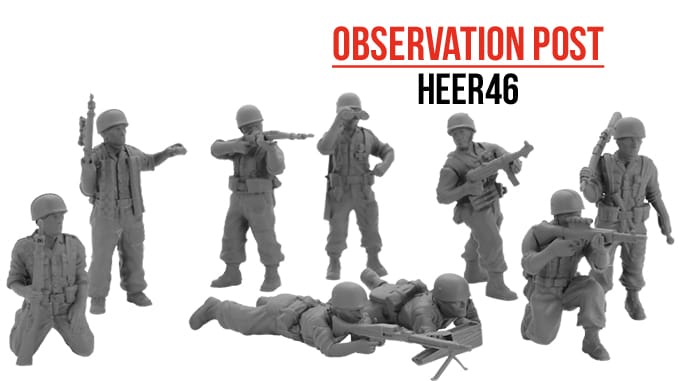 Heer46 have added more excellent miniatures to their 28mm Fallschrimjäger Range for use in the Mediterranean theatre. The latest releases are mixed between specialist and command figures, all offered in a number of parts.

The Trupp B set is ten figures, with an officer with binoculars, a sniper with a scoped rifle, kneeling FG-42 gunner, a prone MG-42 team firing, three riflemen, and two NCO’s with MP40 SMGs. All the figures are excellently sculpted using 3D design software and re-produced from resin 3D prints to make metal production moulds.

Taken from the Fallschrimjäger in Italy Kickstarter the company ran, these are now available to retail customers. We featured the first release of figures a while ago and thought they were so good, we commissioned a writer to compare them to the equally meritorious Bolt Action release. The Heer46 figures are more akin to ‘real’ troops rather than caricatures, and work well alongside similar figures or when used in units from the same manufacturer.

If you’re looking for ‘men at war’, these are the figures for you. The level of realism is akin to the Perry approach, albeit these are somewhat larger and more bulky. There are still more figures to come, so you’ll soon be able to field an entire unit of the same style of figure. Lucky you!