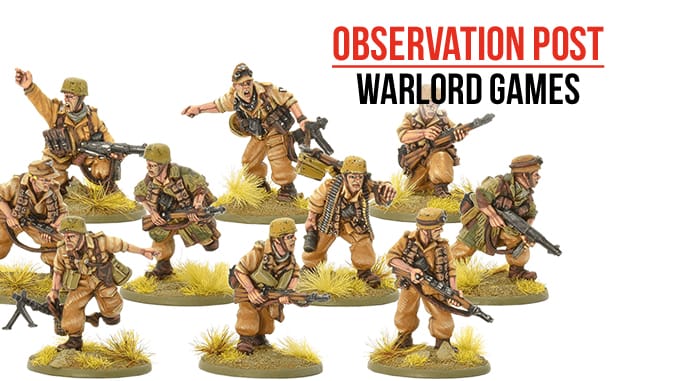 Warlord Games can always be relied upon to take a theatre of World War Two and offer as many infantry and support options as possible. One of their latest releases for use with the Bolt Action rules is this squad of Fallschirmjager.

This squad box consists of 10 metal figures, with the by now standard NCO and 2 others with SMGs, a 2-man LMG team with MG34 and 5 figures with KAR 98k rifles. What is different is the fact that all are dressed in the tropical uniform for operations in Crete, Greece, the Western Desert and Italy. Three of the figures have camo smocks over their uniforms but most have rolled sleeves and baggy trousers. A mix of field caps and paratroop helmets are in evidence.

The figures are in active, animated poses, with even those kneeling or squatting getting ready to fire or giving orders. Some are running, others advancing cautiously, but all are involved in combat, a fighting squad with a tough reputation.

These are all well sculpted figures and the poses are characterful. The sense of motion is good to see, and they are far less ‘caricatured’ than some in the Bolt Action range. A useful set of figures, although with only 10 poses, it would be hard to build a varied army in metal. Perhaps, if combined with the plastic Afrika Korps and Fallschirmjager sets, it could be possible to use these as the core of a small force for use in the campaigns mentioned.