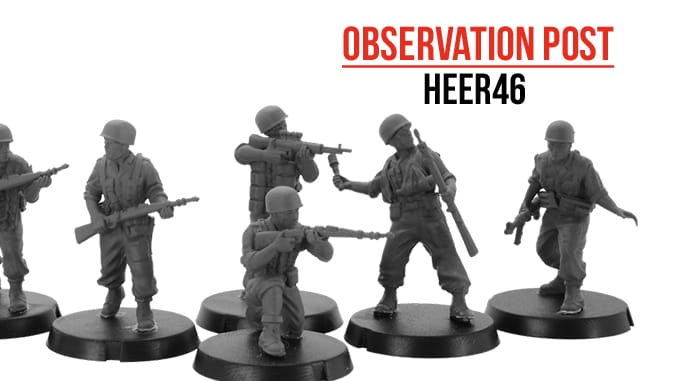 Heer46 are renowned for the quality of their World War Two miniatures. From the historical Eastern Front Battle of Kharkov to the alternate history of a war which stretched into 1946, they have a number of metal and resin figures and vehicles that set new standards.

This is reflected in the upcoming release of a number of packs of Fallschirmjäger, German paratroopers who fought on foot as elite infantry as often as landing from the sky. One of the areas which make these figures different is that they are designed for use as troops posted to North Africa and Italy in 1943, meaning they wear tropical uniforms, including rolled shirtsleeves and shorts.

Each figure comes with separate arms, allowing for the arming of certain of the poses with Kar98K rifles, MP40 sub machine guns, an MG42 light machine gun and the unique FG42 ‘paratrooper rifle’. In this way, the figures may be armed as a standard 10 man ‘trupp’ of the era, with some poseability being an option.

The range also includes a HQ unit, two nicely posed officers in shorts with separate arms with hands holding maps or an MP40.

Probably the most attractive aspect of these miniatures is the fact that they are extremely well sculpted, being based upon Computer Aided Designs, and have excellent posing and realistic anatomy. The equipment and uniforms shown on the figures are not only accurate but are worn in a realistic style, showing the level of research undertaken to portray real troops. These are not caricatures of soldiers but accurate renditions.

Heer46 currently has a Kickstarter in progress to fund full production of these and other miniatures in the range. Basic squads, support weapons, and more are on the way, allowing the gamer to field almost every option straight away. Another great product from this small company, with hopefully many more to come.