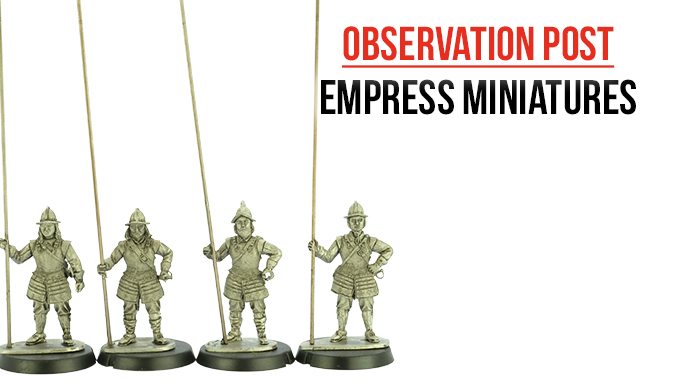 Empress Miniatures have added to their excellent English Civil War with a number of new packs. These were sculpted by the talented Tony Boustead and sponsored by one of the Empress customers, Ian Bailey.

Using recent research, the first release cover the period from 1630 to 1644, making some of the miniatures suitable for troops fighting in the Thirty Years War. There are plans to embrace the later war period and the New Model Army.

With Command, Pike and Musketmen packs already released, it worth noting these are a newer, fresher take on the styles of clothing and equipment worn during this early period. In a sense, by buying these packs, you are buying the most recent research and a more ‘realistic’ looking force. Equally, these miniatures would mix well with other figures, perhaps forming the front rank behind which other company’s miniatures may be ranked.

An example of this fresh take is found with the pikemen. Although equipped with similar armour and helms, there is a less than uniform appearance and each soldier wears his equipment with some personalised kit that makes them more individualistic than other ranges.

There are already a number of foot packs available, plus an artillery piece in the form of a Saker gun. These are generic miniatures, suitable for both sides in the ECW and possibly European service. The use of the figures as ‘Royalist’ or ‘Parliamentarian’ is, as always, up to the gamer. These are great figures that are evocative of the early days of the ECW. A series of pike and shotte units comprising these miniatures would look fantastic on the tabletop whilst reflecting the most up to date impression of such an army of the period.