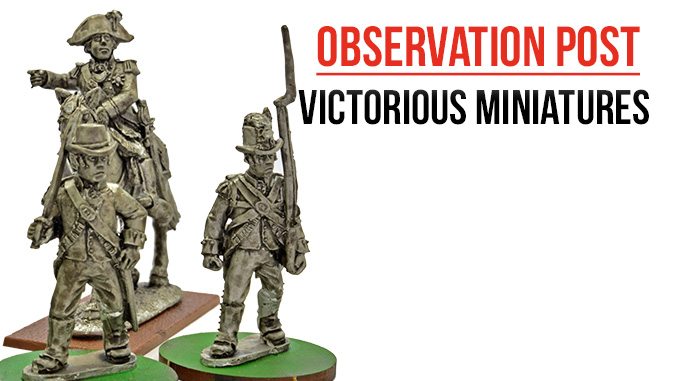 A new company based in the UK, Victorious Miniatures has focused its first product range on the British Army for the period 1793 to 1795. Sent for review were one pack of infantry and two commanders on horseback.

The infantry pack consists of four advancing miniatures, with two figures at ‘march attack’ with shouldered weapons, an officer with drawn sword and a drummer. They are all dressed in the long coats and headgear of the early period, complete with gaiters on their lower legs.

The command figures on horseback represent the Duke of York himself, plus a figure suitable for use as a regimental Colonel or similar.

There is a particularly nice level of detail on these miniatures, complete with facings, turnbacks and other uniform and equipment details.

All the figures can be said to be representing the army that saw service in Flanders and the Low Countries against the French Revolutionary forces that would soon become the armies of the French Empire under Napoleon. They could also be used for service in Ireland during the same period.

These first figures are nicely sculpted and have a sense of animation within the confines of the poses chosen. There are more packs planned to complete the range. In addition, there are plans to sell 28mm figures for the Boxer Rebellion at some point in the future. It’s always good to see a new company focusing in on an under-represented period and we look forward to seeing more in the future.