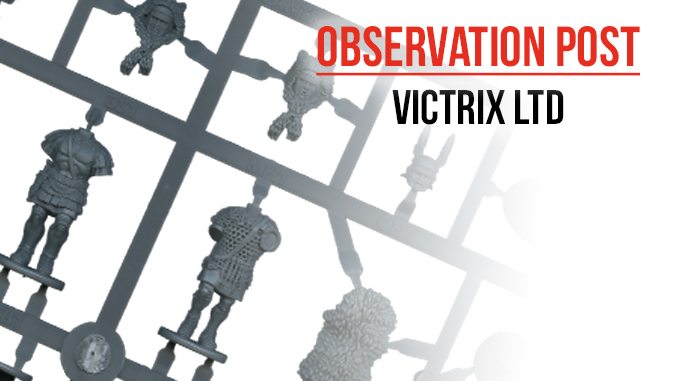 Victrix Ltd. continues to release some of the best plastic miniatures on the market. The current focus is upon forces from the Ancient world, with this addition to their Roman range being just one aspect of their range.

Following the success of their Early Imperial Roman Legionaries, they have added the next logical step, Roman Auxiliary Infantry. These have some excellent detail, especially the chainmail armour, which really stands out.

There are enough parts in the kit to produce 24 figures, and a whole number of options, from different spear, head and arm options. Helmets include the basic and later reinforced versions, allowing the figures to be used against a number of foes. There are also parts to create a command group, including an officer, musician, standard bearer and optio. There are also wolf and bearskin cape options, allowing you to further distinguish your command group or add praetorian troops.

The parts may be assembled very easily and only need minimal cleanup. They need to be fixed with plastic glue or similar adhesive but the fit to one another is very good, just needing some thought on positioning at times. They are designed to be used in ranks on the tabletop, so overly extravagant posing isn’t recommended.

These figures are of a similar high quality to the Legionaries and work out remarkably inexpensive when creating units. In fact, they could easily be used not only to bulk out your army but also as a replacement for most metal miniatures currently available. The detail is sufficient to rival and often surpass most other ranges available.

Victrix plan on adding more to this range, including cavalry and more. Plus, in 2018, they intend to add to the Napoleonic ranges and branch out into new theatres, such as World War Two. If they can maintain the same standards for future releases, the company will continue to offer some of the best 28mm plastics on the marketplace for years to come.