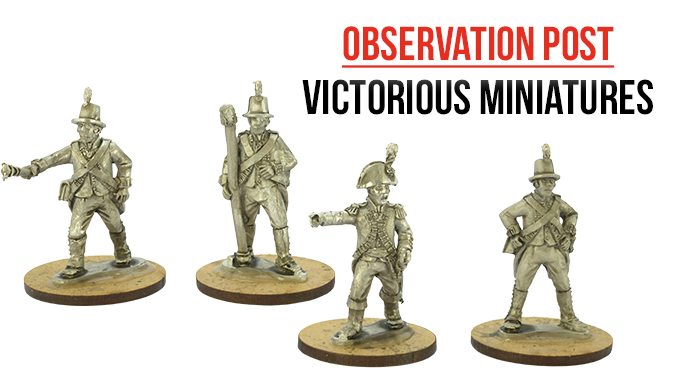 Victorious Miniatures have continued to add to their figures ranges with Chinese troops for the Boxer Rebellion. However, they started out by providing miniatures to represent the British army in the Late French Revolution/ Early Napoleonic period., some of the few available on the market.

Provided for review were NAPBR20 Gun Crew Firing and NAPBR23 British 5.5” Howitzer. The gun crew consists of four figures, all in firing poses, with a figure leaning forward to light the touch hole, one figure standing ready with the swab and the third standing by to fetch another round. The fourth figure is an officer, directing operations and providing orders. All but the officer wear the ‘Mother Shipton’ headgear which was in use up until around 1800. These are well sculpted miniatures from the talented tools of Mark Sims, who adds a little character to each miniature he produces, whilst ensuring that the all important uniforms and equipment are as accurate as possible. There is also a set of loading gun crew which are similarly accurate.

These gun crews are perfect for use with the 5.5” Howitzer, just one of the many field pieces available from the range. This is a solid looking piece of artillery, with the standard number of parts to produce a nicely rendered tabletop representation. Simple to construct, painting would be fairly quick and the whole piece would be ready for the battlefield in short order.

The overall impression of this growing range is of a top quality set of sculpts and castings for a period that is woefully under represented. There are a number of packs available to tempt those who’ve been looking for a suitably accurate set of models for the Flanders Campaign at the very start of Britain’s involvement in the Napoleonic Wars.

You can view the full range here : http://victoriousminiatures.com/