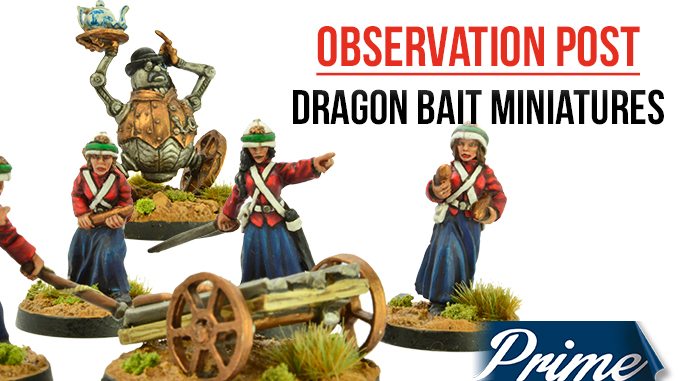 Following their successful Kickstarter campaign, Dragon Bait were able to create the Venus 1888 Women at War range, a Victorian Science Fiction range with a unique twist. We featured the core infantry and cavalry units in a previous issue, but this time around we have the ‘add-ons’ from the campaign.

Our first set of miniatures is General Lady Grey, the commander of all British forces on Venus. In this background, only women are able to survive on Venus due to the effects of a pathogen which reduces males to a primitive state. Lady Grey is depicted seated sidesaddle on one of the main mounts used on Venus, a clockwork unicorn. She is a haughty looking figure, complete with opera glasses and holding a cup of tea. Of course, tea is a required essential on campaign, and the second figure in this set is Royce, Lady Grey’s clockwork butler, holding a tea tray aloft whilst holding his bowler hat securely on his head.

The next set of miniatures is some support for the infantry and cavalry, a British Rocket Artillery weapon. The set consist of a wheeled rocket tray with three troughs, a loader carrying a rocket forward, another soldier ready to pass more rockets, a firer with a carefully extended taper and an officer or NCO with sword, directing the weapon’s fire. In addition to the weapon and crew, there is a clockwork mule artillery supply ‘animal’, which also doubles up as a transport ‘tow’, plus a piled set of rifles and equipment for the crew.

The last two pairs of figures are a Stubborn Mechanical Mule, with a soldier trying hard to get the laden mule moving, and a set of Clockwork Cavalry that have succumbed to enemy action and are being used for cover by the grim faced riders, armed with pistols and swords. These are nicely animated and both sets have a sense of narrative.

These are excellently sculpted miniatures and are a breath of fresh air in the realms of VSF. They should be on general release as of the end of September, so keep a look out for the announcement on the Dragonbait Miniatures website and Facebook page.